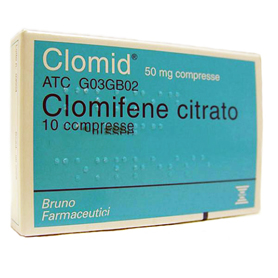 – Along with Nolvadex, Clomid is one of the two principal SERMs (selective estrogen receptor modulators) used for enhanced recovery of testosterone production after anabolic steroid cycles.

To understand how Clomid can aid this process, let’s look at how natural testosterone production is regulated.

Testosterone production is regulated by a feedback loop which senses not only testosterone or other androgen levels, but also estrogen levels. This feedback loop includes the hypothalamus, the pituitary, and the testes (often referred to as the HPTA, or hypothalamic-pituitary-testicular axis.)

When the hypothalamus senses low estrogen levels and does not sense high androgen levels, it’s stimulated to signal the pituitary by producing more LHRH, which stands for LH releasing hormone. On receiving this signal, the pituitary produces more LH (luteinizing hormone) which in turn signals the testes to produce more testosterone.

During an anabolic steroid cycle, high androgen levels shut this process down entirely. If this is for only a relatively short period such as 8 weeks, this is not a real issue. Over a longer period of time, testicular atrophy might occur, however. That can be avoided with HCG usage. Something that cannot be avoided, however, is that the hypothalamus and pituitary respond not only according to the hormone levels which they sense at a given moment, but are affected in their response by their recent exposure. When that exposure has been an extended period of anabolic steroid use, responsiveness typically is poor even after anabolic steroid use has ceased.

Clomid ordinarily is dosed at 50 mg/day. However, it’s important to note that clomiphene has a long half life. Where this has relevance is that when a daily dose is taken, the body will have not only that dose in it, but also an accumulated amount of about five days’ worth of previous doses as well. That’s fine: it results in correct blood levels. Where there can be a problem is when first starting use. If simply taking 50 mg/day from the beginning, there is no such buildup and levels will be low.

To account for this, 300 mg is taken on the first day, as three doses of 100 mg, or optionally six doses of 50 mg. This immediately gets levels to where they should be. Ongoing 50 mg/day dosing will maintain this level.

After day 1, doses of more than 50 mg are not needed and are not recommended. They will not improve results, but may increase adverse side effects.

Clomid rarely leads to libido issues, which can be a problem with Nolvadex. For this reason some prefer it to Nolvadex. Others, who do not have that issue with Nolvadex, may prefer that drug. Both are effective for restoring natural testosterone production. I have a slightly better opinion of Clomid for effectiveness, but where a person dislikes Clomid for emotional effects, or prefers Nolvadex for any reason, Nolvadex is a perfectly acceptable substitute.

PCT with Clomid should begin as soon as androgen levels have dropped to normal, and continue until confident that natural testosterone production has been fully restored.

Clomid, properly, is a brand name: typically clomiphene citrate products are used, but popularly called Clomid. Clomiphene citrate is widely available both as a pharmaceutical and even more widely as a research chemical, often in liquid form for oral use.

Clomid can and usually should be used as the only SERM in PCT. In most instances, there is no point to combining with another SERM. Where a second SERM such as Nolvadex is combined with Clomid, each should be used at half dose rather than full dose. Using full dose of each does not provide enhanced efficacy and only increases risk of side effects.

Clomiphene citrate is the chemical name of active ingredient in Clomid. Clomid is a registered trademark of Merrell Dow Pharmaceuticals in the United States and/or other countries.